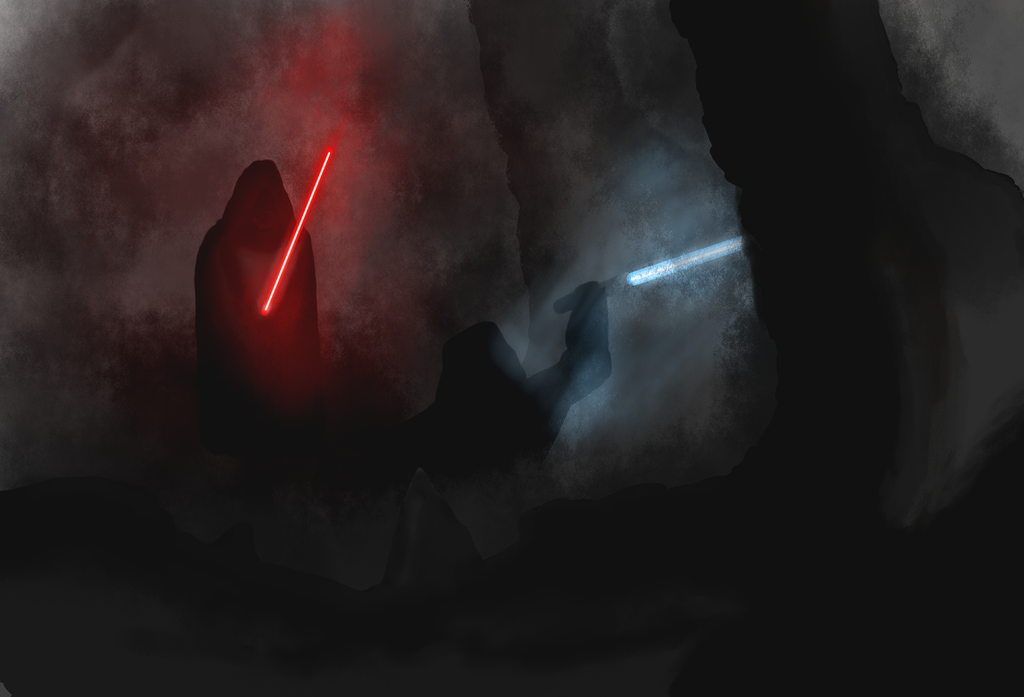 Sheikh Wars - Return of the Humiliti

Ok yes, that was a failed attempt to rhyme humility with Jedi but gets the trick done.

Today we are living in a world where the Ummah is breaking apart into fractions and it has become very easy for people to “Divide and Rule” us, mostly thanks to our own doings. Every now and then an article or post or video pops up of people claiming that Sheikh X is deviated and my Sheikh is right. Though many a time such messages may be helpful, a person should have sound knowledge or if not ask a person of knowledge before acting on any such thing. But wait! If both are Shuyookh, then why the fight in the first place? Aren’t they supposed to be our beacon of light? Then why are they trying to blow each others light out?

Those who split up their religion and become (mere) sects – each party rejoicing in that which is with itself. (Surah: Al Rum, volume; 21, verse 32)

If one chooses to follow the school of thought of one of the four imams – or, for that matter, any other legal scholar – one should not become so enamored of their legal verdicts to the extent of not caring how a verdict was derived or what evidence was used by the scholars to support it. What matters, before anything else, is the evidence. This must be the basis of what we call people to follow. The fact that there might be many opinions on an issue does not give us license to adopt one point of view without careful scrutiny. This leads to bias and chauvinism, which is an evil all four imams warned us against. Otherwise, every person sees things from a different angle. The greatest of legal scholars are human beings, susceptible to the limitations of their experience. They are shaped by their upbringing circumstances, and the events of their lives. Their knowledge and practical wisdom increase over time through study and application.

As Sheikh Salman Al Ouda beautifully puts, “The scholars of the Sunnah are targeted from all directions. The media likes to stereotype them as “dervishes” and “gluttons” and foist upon them a host of other ignoble epithets. Too often we find people speaking about a scholar who is distinguished in knowledge and respectable of character, yet they do nothing but seek out faults to attribute to him. They seem to have to accuse him of either hypocrisy, avarice, or simple-mindedness, though in truth he could be as far removed from these qualities as any person could hope to be. If they cannot find anything to criticize him with personally, we often hear them saying that his children are impious. Some novice students of Islamic knowledge seem to have no qualms about speaking ill of the scholars or of making light of their status and speaking of them as if they were fellow classmates. They say things like “So-and-so is of little consequence.” Or “He made a serious mistake.” Some of these students who possess neither an inkling of understanding in the field of Islamic Studies nor any idea of how to conduct themselves with the Qur’ân and Sunnah have the audacity to mention an opinion of one of these scholars that they disagree with and follow it up by reciting Allah’s words: “And they took their priests and monks as Lords beside Allah.” All too often, the opinion they deride in this dubious fashion is the correct one, or is at least one that is strongly supported by clear evidence from the Qur’ân and Sunnah. After all this, they then have the gall to accuse the scholars further by saying: “They do not enjoin what is right nor forbid what is wrong.” If these scholars had been granted the facility to speak, indeed they would have spoken. It is from the Muslim public that the scholar draws his strength. If they abandon him or turn on him, he becomes like a man going into the fray unarmed.”

It’s very hypocritical of us Muslims to speak of how some individuals take things out of context and don’t understand what is meant by a particular narration in the Tradition, and that they should be asking and inquiring before issuing judgments on us, when at the same time that’s exactly what we do with each other.

So now the question arises is, what if some opinions are so absurd that they cannot be digested OR they are clearly wrong? Humility is an essential characteristic that a student must have to truly benefit from his or her teacher.  In the hadith of the Messenger of Allah ﷺ, when the angel Jibril came to ask the Prophetﷺ about Islam, Iman, and Iḥsan, he is described as having, “put his knees against the knees [of the Prophet ﷺ] and placed his hands on his thighs.” When the Companions used to sit with the Messenger of Allahﷺ, they did not used to raise their heads up to him out of their reverence for him.  It is reported on the authority of Anas , “If the Messenger of Allahﷺ used to enter the mosque, none of us used to raise our heads except Abu Bakr and Umar.  They used to smile at him and he used to smile at them.” It is also reported on the authority of Ubāda Ibn. Al-Ṣamit that the Messenger of Allahﷺ said regarding respecting scholars and honoring them, “He is not from my community who does not venerate our elders, have mercy on our youth, and know the rights of our scholars.”

It is related by Shaʽbī that, Zayd Ibn Thabit led a funeral prayer.  He then brought his riding animal near so he could ride it and  Ibn Abbas came to assist him in mounting.  Upon this, Zayd said, “Do not do this O, son of the Messenger of Allah ﷺ’s uncle.”  Ibn ʽAbbas replied, “This is how he ordered us to treat our scholars and elders.”

Many of the Muslim rulers and caliphs also used to give immense importance to knowledge and the reverence of scholars.  It is related that Harun Al-Rashid used to send his two sons Al-Amin and Al-Mamun to learn from Imam Al-Kisaʼi who was one of the seven reciters of the Quran.  One day after class was finished; Al-Amin and Al-Mamun were competing to carry the sandals of the Sheikh. Each one wanted to carry them and then they settled for each of them carrying one sandal.  Meanwhile, Harun Al-Rashid was watching them from an elevated place in his residence.  He later invited the Sheikh to a table he had prepared for him.  He then asked him during the meal, “Who is the happiest of people?”  The Sheikh said to him: “You are O Leader of the Believers.”  He said, “No.  The happiest of people is the one who the two heirs of the Leader of the Believers quarrel to carry his sandals.”

Ali RA would say regarding the manners of respect a student should have with his or her teacher, “From the rights of the scholar over you is that you give greeting to people generally and greet him specifically, that you do not ask him questions excessively, you do not meet his answers with discord, you do not pressure him if he tires, you do not grab his garment if he sets forth, you do not reveal to him secrets, you do not back bite anyone in his presence, you do not seek out his shortcomings, and if he makes a mistake you accept his excuse.  It is incumbent upon you to respect and honor him for the sake of God as long as he adheres to the commands of God.  And [you must not] sit with your back towards him, and if he has a need you should hasten before everyone in serving him.”

This right here is one powerful lesson for all of us. Leave the refutations to the people of knowledge, the scholars. Even if we find someone we “think” is wrong, we have the right to disagree to that but we do not have the right to abuse or degrade the honor of that scholar. Has it ever crossed our hearts that the person we are talking about has served the Deen of Allah to the best of their ability more years than that we have walked this Earth?

Just ponder on that a bit….

It is generally the case that we find out later that it was actually the students or the followers of a particular Sheikh who got angry/carried away with their words and the Sheikh had nothing to do with it. On the contrary they respect each other and their work alot. It is just the opinion or an action that they may disapprove of, not the person.

A brilliant story comes to my mind of Sheikh Abd Al Aziz Bin Abd Allah Bin Baz the previous grand Mufti of Saudi Arabia and one of the mountains in Islamic knowledge around the globe in our recent times, along with Sheikh Muhammad Bin Salih Al Uthaymeen another mountain in the history of this Ummah and one of its greatest Jurists, as well as Sheikh Muhammed Nasir Al Deen Al Albani, the Muhaddith of Bilad Al Sham and one of the masters of Hadith who revived the Sunnah in our recent years. Just imagine all of them together at once. That’s like an Ilm Festival right there. A blessing of Allah to the students and the people. So this gathering was during the Hajj and specifically in Mina and this was the last time Sheikh Al Albani went forHajj. The Ameer of the gathering or the meeting was Sheikh Ibn Baz. Obviously the people and students of knowledge were coming with questions to ask the 3 Sheikhs. I mean who would skip such a chance…

When a question in Aqeedah would come up to the Sheikh (Sheikh Ibn Baz), would answer it himself. And whenever a question related to Fiqh would come up he’d forward it to Sheikh Uthaymeen to answer. While anything related to Hadith and its sciences, it would go to Sheikh Al Albani. Now just pause here. Anyone of them could have said no I’ll answer all or try to assert his superiority in terms of knowledge and power or the rest, but NO, that’s what separates mountains from mole hills.

Sheikh Ibn Baz could have easily said that he was the Grand Mufti and he had the right to lead the prayer but wallahi this statement of  Sheikh Ibn Baz with all his knowledge and power ” teach us Ya Shiekh” is what strikes out the most. It shows his humility, modesty and purity of heart. It’s really a lesson for us to learn how to deal with each other and one of the greatest lessons of politeness and respect. These are the manners of our great scholars and  their politeness and humbleness with each other and the people around them. What we have to notice here is that both Shuyookh had various difference of opinions like the infamous niqab debate. But that was them sticking to their opinions, they did not let that degrade their respect for each other. Then why do we who are not even proper students of knowledge so easy to lash out against scholars? If we are so ready to fight in the name of the scholars then why don’t we first learn from them respect, manners and humility? Why have we taken it so lightly to ridicule the inheritors of the Prophetﷺ? Think…..

Wisdom is the lost property of the believer; wherever they find it it’s theirs

“Our Lord, forgive us and our brothers who preceded us in faith and leave not in our hearts [any] resentment toward those who have believed. Our Lord, You are indeed full of Kindness, Most Merciful.” [Qur’an, 59:10]