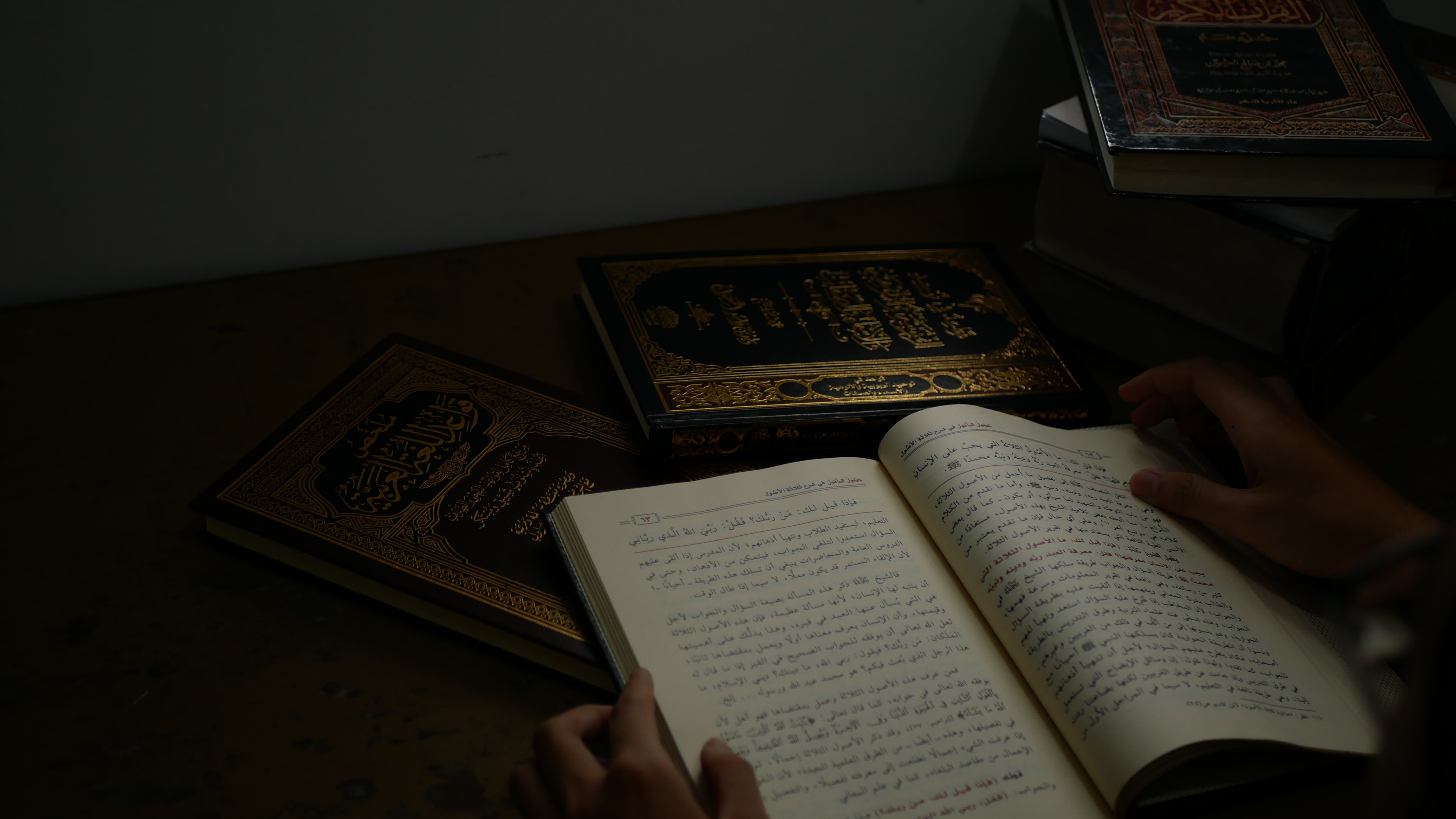 All praise and thanks are due to Allah who begins the creation of man by his grace, and fashions him while still being in the womb [of his mother] by His Wisdom. He brings him out into His gentle care and facilitated for him his sustenance; and teaches him what he did not know. Indeed, the grace of Allah upon him is immense and tremendous.

– Scholars use this form of writing to follow the Book of Allah. This is the benchmark the scholars follow in authoring a book and to thank Allah for the blessings that He has bestowed upon us.
Hikmah comprises of Adl (Justice), Ilm (Knowledge), Hilm (Insight).

– Everyone started from the bottom. Imagine that there was a point where our knowledge was at the same level of Imam Bukhari. he wasn’t born knowing Ahadith. He learnt and was blessed with the knowledge. It is from the Mercy of Allah that He taught and blessed us with knowledge

[All praise is due to Him] Who directed mankind to recognise His Existence through His signs and left them no excuse [to disobey Him or associates partners with Him or disbelieve in Him] as He conveyed His message to humanity through His Messengers, the best of His creation; henceforth He guided whomever He destined to be guided through His Favour, and he led astray whomever He deemed by His Justice.

– The Messengers are sent such that on the Day of Judgement, no one can claim that they were not informed of tawheed.
Daleel: [Surah an-Nisa, 165]

– Allah guides whomsoever He Wills. Hidayah is majorly classified under 2 categories.
1. Hidayah at-Tawfeeq: This is someone actually guiding to the path, or opening the doors of guidance. This is purely in the Hands of Allah. This is when someone actually sets out to do something after seeing the sign, and only Allah can give this tawfeeq.
Daleel:

Indeed, [O Muhammad], you do not guide whom you like, but Allah guides whom He wills. And He is most knowing of the [rightly] guided. [Surah al-Qasas, 56]

2. Hidayah al-Irshad: The sign or the path that is supposed to guide. Think of it as a GPS or a signboard to the desired destination. This is what you are supposed to do.
Daleel:

And thus We have revealed to you an inspiration of Our command. You did not know what is the Book or [what is] faith, but We have made it a light by which We guide whom We will of Our servants. And indeed, [O Muhammad], you guide to a straight path [Surah al-Shura, 52]

3. Hidayah al- A’mma: Guided animals to build their houses, plants to grow, the baby to suckle etc. It can be understood as intuition.
Daleel:

4. Hidayah al-Jannah aw Naar: Allah guiding someone to Jannar or Jahannam in the Hereafter.
Daleel:

Indeed, those who have believed and done righteous deeds – their Lord will guide them because of their faith. Beneath them rivers will flow in the Gardens of Pleasure [Surah Yunus, 9]

What will the people say when they are entered into Jannah?

And We will have removed whatever is within their breasts of resentment, [while] flowing beneath them are rivers. And they will say, “Praise to Allah , who has guided us to this; and we would never have been guided if Allah had not guided us. Certainly the messengers of our Lord had come with the truth.” And they will be called, “This is Paradise, which you have been made to inherit for what you used to do. [Surah al-A’raf, 43]
This is the pinnacle of Hidayah

– Adl linguistically means to put something in its proper place. If someone has gone astray, then as Ahlus Sunnah we believe that this person has gone astray because of their own choice and deeds. Why? Allah is the Most Just and has Ultimate Justice. Allah testing those in the Hereafter, whom the message didn’t reach in a proper manner is Allah’s Dominion, and there is not much we can delve into in this matter. As Ahlus Sunnah, we do not state that a specific person is destined for Jannah or Jahannam. We can only make a ruling on the apparent and in general.
[Surah az-Zumar, 3]
[Surah as-Saff, 5]
[Surah al-Hajj, 10]
[Surah al-Kahf, 49]

[All praise is due to Him] Who facilitated the path of righteousness for the believers and opened their hearts to receive His reminders; so they expressed their belief in Allah [outwardly] through the words that they uttered with their tongues, and through their hearts [inwardly] because they were sincere in their belief and acted upon what was brought forth by the Messengers and the revealed books. And so they learned what He ordained for them and abstained from investigating what is beyond, and sufficed with what is made lawful for them, therefore they abstained from the unlawful.

– This is a hint at the definition or description of Iman. Speech plus actions are needed. This highlights the point that man restricts himself to the boundaries of Halal and Haram and it also covers investigating matters using one’s Aql that Allah and His Messenger didn’t expound upon.
[Surah Isra, 36]

May Allah assist both us and you in taking care of what He has entrusted us with and in holding to His legislated laws.

You have asked me to write a short treatise for you about what is obligatory in the religion – those things which should be pronounced by the tongue and believed by the heart and done by the limbs, as well as to include therein the acts of Sunnah related to the religious obligations – the confirmed (mu’akkadah), the optional (nafilah) and the desirable (raghibah), and to mention some of the morals and etiquettes related to these.

– This Risalah was written upon the request of Abu Mahfouz Muhraz Bin Khalaf al-Bakri al-Tunisi- al-Maliki. It includes Aqeedah, Fiqh and Adab.

– The Risalah of the Prophet is based on Rahmah

[Moreover, you asked me to mention some] key principles and derived judgements in jurisprudence (fiqh) according to the madhhab and way of Imam Malik ibn Anas (may Allah have mercy on him). And to add some explanatory comments taken from the scholars well-versed in jurisprudence, and those who are learned in exegesis. You explained that your reason for asking me to compose this treatise is the desire to teach these things to children the same way you teach them the letters of the Qur’an; so that their hearts acquire a sound understanding of Allah’s religion and law at an early age – to relish its blessing and bask in its grace. Having considered that, I decided to comply with your request out of the same hope of gaining for both myself and you of the reward promised to whoever teaches the religion of Allah or calls to it.

– All the Imams of the Madhaib were upon the same Madhab. If one wishes to study the creed based on the scholars of the particular madhab, we have:
Hanafi: al-Aqeedah al-Tahawiyyah by Imam at-Tahawi
Shafi’i: Sharh as-Sunnah by Imam Muzani
Maliki: Muqaddimah Ibn Abi Zayd al-Qayrawani
Hanbali: Usul as-Sunnah by Imam Ahmad

– This shows the importance of establishing tawheed into the hearts of the children. This is to bring their hearts closer to Allah from a young age and anchor them in it.

You should know that the most upright heart is one which is the most retentive when it comes to absorbing goodness, and that the heart most likely to hasten towards a good deed is one that has not yet been exposed to evil.

– The heart is like a cup. To fill it with pure water, it needs to be cleaned with tazkiyatun nafs and tasawwuf. A clean heart will hasten towards good deeds easily.

The thing that the people of advice ate most concerned about and which those who desire its reward most want is to put good into the hearts of the children of the believers so that it becomes firmly established in them; and to make them comprehend what the tenets of religion and the limits of the Shari’ah are in order that they may be satisfied with that and to make them realise those things in the religion which their hearts have to accept and their limbs are required to do.

– If the Aqeedah is embedded at a young age, they will be firm upon and strive for that which they already have without being moved by doubts.

Moreover, for it has been narrated that ‘Teaching the book of Allah to children extinguishes the anger of Allah’ and that ‘Teaching something to a child leaves a impression lasting that is as indelible as the marks of carving on a rock.’

– This first bit is an extremely weak narration with some problems in it. It is found in the books of Ibadi scholars. That is why the Imam here hasn’t attributed it to the Prophet. He said that it has been reported.

– The narration of carving on the rock is a statement famously reported from the Salaf.

Therefore, having said that, I included herein that which children will benefit from memorising, and attain honour for acquiring, and shall receive joy for believing in and acting upon, by the permission of Allah. It was related that the Prophet ( صلى الله عليه وسلم) ordered us to command our children to pray when they reach the age of seven, and to discipline them should they be lax in it, from the age of ten, and to separate the beds of boys and girls at such an age. Similarly, they should be taught before they reach puberty what Allah has ordained upon His slaves, be it an action or a saying, so that by the time they reach the age of puberty, Allah’s commandments become firmly entrenched in their hearts, they become well-acquainted with them, and are able to practice them with comfort and ease. Indeed, Allah has made certain beliefs obligatory for the heart and certain acts of obedience obligatory for the limbs.

– You can attend a 1000 classes, but you will only benefit from that which you memorize. In reality, memorizing little has more benefit than reading a lot. Our deen is built on the foundations of memorization.

– We can see the deep concern of the Imam regarding his society and especially the children in his words.

I shall proceed to explain to you in detail all that I have mentioned in chapters so that it will be easier for those who are studying it to understand, if Allah wills – it is Him we ask for guidance and Him we ask for help. And there is no power or strength except in Allah, the Most High, the Great. May Allah send abundant blessing of Peace upon our master, Muhammad His Prophet, and his family and Companions.

DISCLAIMER: The following is based on the explanation by  Sheikh Dr. Saalih Ibn Sa’d As-Suhaimi who is a former Professor from the Islamic University of Madinah and currently a teacher in the Prophet’s Masjid (at the time of writing) and Supervisor of the Da’wah Centers in Madinah.