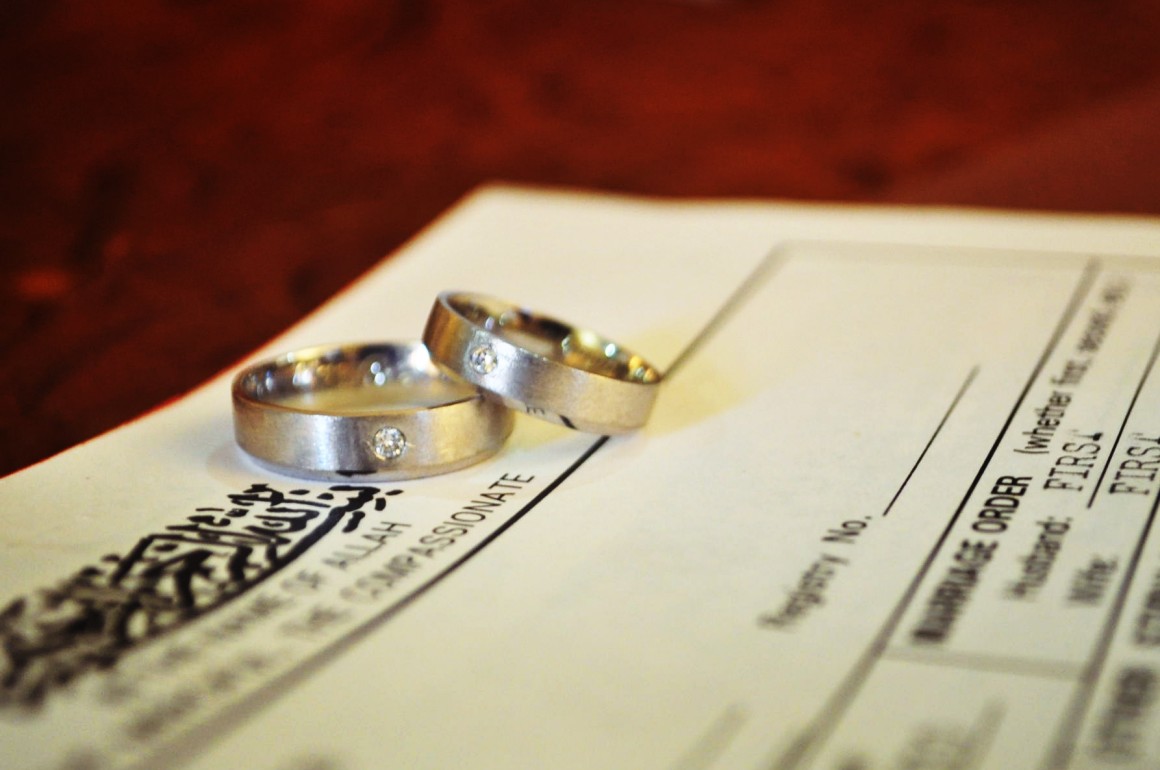 After the contract was signed, the real party started. All around me people were complimenting each other on their dresses or their hair or their makeup skills. One thing that is very sought after is skin as fair as a dove. It doesn’t matter how you achieve it, nobody cares if you’re naturally fair or not. You can make your skin white using makeup. It’s actually pretty funny. White people covet an olive-colored complexion and they get tanned to get it whereas Asians covet white skin. It’s sad when I see girls who have a darker skin-tone get rejected by families just because the girl is “dark”. These poor girls then have to cake on makeup to please the society. Sad!

I enjoyed the lavish party. Well, I sat on a chair on the stage, blushing and looking down the entire time but I guess that can be counted as “enjoyable”. Suddenly, I saw some aunties had cornered my sister in law and I could hear the aunty ask, “So what did you people get from the bride’s side? You must have got a lot of stuff right?”

Another aunty said, with a smirk, “Is the furniture sturdy? Does it look nice? What color is it? My daughter-in-law got white furniture, it was very expensive and very beautiful.”

“No, we didn’t ask for anything. They were insisting but we have enough, Alhamdulillah.” my sister-in-law replied.

“Oh! Really? Well, that’s just stupid. When they wanted to give there’s no harm is taking it.”

“Actually, Ali did not want anything. Neither did any of us. He is strictly against all this. Plus we are already taking a gem from their house. We don’t need anything more.”

This answer got tears to my eyes. It was so beautiful. My sister-in-law was not very old, this shows how she was raised, with what values. The aunties scrunched up their noses and started discussing amongst themselves.

Soon, it was dinner time. Everyone hurried towards the dining area. My sister-in-law brought me a plate but of course I couldn’t eat because sitting with my back straight and smiling all the time is extremely tiring. My cheek muscles were in pain, so was my jaw.

It so happens that a few people did not eat, not because there was no food but because apparently nobody called them. The saddest part is, they weren’t even people from outside but my own extended family. With so many guests, it is understandable that mama missed going and telling them personally to come and eat. Whereas, as my “family” they should have done that. They should have gone to everyone and called them for dinner. Asian weddings are seriously painful. Families get broken during weddings on insignificant things.

The time is here. I have to go to a new house, a new family. I was mentally prepared for it, or so I thought. I was trying to remain calm but I was seriously freaking out. I did not want to go to someone else’s house. Why couldn’t the guy come and live with my parents and me? How can I trust someone I don’t even know very well? All these thoughts were running through my mind when Maryam came,

“Fatima, your husband is coming. Be prepared.”

I took a deep breath because now all the aunties would look at me and Ali together and judge us. They would see if our looks complimented each other. They would see if he was fairer than me. They would see if he has a straight Grecian nose. They would discuss his clothes, the way he was sitting, the way he smiled at me. They would discuss everything. If he looked at me and smiled, they would assume that it was a “love marriage” wherein Ali and I had a relationship prior to the Nikah. Oh the shame! Astaghfirullah. I never understood it. Aren’t arranged marriages in a way also love marriages? Who marries people they don’t love? Asian parents encourage the guy and the girl to talk to each other before the Nikah. Isn’t that wrong as well? Isn’t that sort of a relationship? And the excuse that they give is “they’re getting married”. I don’t think this is a legitimate excuse. People in a relationship might also assume that someday they’ll get married and “make it halal”. Asian aunties meddle in everyone’s business. Maybe they don’t mean to but nevertheless they do it. Even if I was in a relationship, then what business is it of theirs to investigate about it and talk about it with others? I understand that Zina is wrong, but shouldn’t the aunties talk to the people involved rather than spreading rumors? They label them as sinful, but aren’t they backbiting as well? And to top it off, nobody gives them a chance to change. No sir! Once a sinner, always a sinner, right? They believe that people can never change.

All around me, I could see aunties looking for young girls. They would look at girls who’ve reached “marriageable age” and then enquire about them. Now that’s not wrong. Islam allows us to enquire about the girl or the guy we’re interested in. but there is a certain way. But of course who can say anything against them? They’re elder than us and it would be impolite. Nobody cares that the girls character is being judged in a way that it shouldn’t. Nobody really cares that the girl feels exceedingly uncomfortable when an aunty asks her personal questions.

I felt bad for Ali. I’m a girl so I’m used to the piercing stares of aunties. But he wasn’t. As we walked out, I saw the car that I was supposed to go in. It was beautiful. A white Rolls-Royce beautifully decorated with ribbons and roses. It was the dream.

I suddenly got exceedingly frightened. I started thinking about Ali and his parents. What if they change after I start living with them? What if they mistreat me? You hear all sorts of stories about horrid mother-in-laws’ and sister-in-laws’. What if Ali’s mother and sisters become mean to me? They seem like very nice people and I did istikhara but you never know. My mind was full of such questions. A whole lot of what ifs.

I bid a teary farewell to my family. I would be seeing them often but it won’t be the same. I won’t live with them. That changes a lot of things. My dad gave me his prayers and I was sent off. I was going to a whole new place. A whole new family. A whole new environment. I was very cautious.

Ali gave me a tissue and smiled at me. I feebly smiled back through my tears. We reached home soon. There was a horde of people waiting to receive us. I was dreading it, I was already tired. We were about to get down from the car when Ali amusingly said, “its show time.” I couldn’t help but laugh at this. He got down and opened the door for me. A perfect gentleman huh? I thought to myself. Let’s see if he genuinely is this gentlemanly.

I was helped out of the car by Ali and his mother. I walked into the house, into my house. All of Ali’s side of the family were present to welcome me. I felt awkward. I didn’t know how to behave. Should I say something? Should I say thank you?

Up until now, marriage life was blissful. I was happy. All that stress and tension seems nothing now. I believe that marriage is nothing less than a gamble. You never know what to expect. You cannot foresee the future. You either win or you lose. You either get happiness or sadness. My own sister-in-law was divorced. She’s very young, only 24 years old but nobody wants to marry her because firstly, she’s divorced and she has a child. The reason for her divorce is heartbreaking. She was divorced just because she gave birth to a girl. Her husband’s family convinced her husband to divorce her. How is that fair? Children come from Allah SWT. Nobody can decide on whether they want a son or a daughter. Science has shown that the gender is usually determined by the father’s genes. Then why is the girl blamed? It’s pathetic. Daughters a blessing from Allah SWT. The Prophet Muhammad SAWS said, “Whoever brings up two girls till they reach the age of puberty, he and I will come on the Day of Resurrection like this,” (and he joined his blessed fingers.)

Why then would you not want a daughter? A daughter would be your ticket to enter Jannah. I can never understand how these people think.

Nevertheless, Ali really is a perfect gentleman. I was being frightened for no reason. My new family is amazing. They never pressure me about having children. They are willing to let me further my studies. Not many Asian families would allow this. As soon as a girl is married, it is expected that she must become a mother as soon as humanly possible and if it doesn’t happen within a year at the most, then the girl would be hounded by questions.

Oh and of course, how could I forget about cooking and cleaning after the husband’s family? Alhamdulillah, Ali and his family do not share this mentality. Every Asian family expects the bride to clean after the husband’s family. The girls’ are expected to do that or else the family will start badmouthing the girl. They say, “But if you see, that’s what Islam tells us to do.” Islam doesn’t. Culture dictates that. It is not compulsory to take care of the husband’s family. And I’m sure most girls would want to work and help their mother-in-laws. Because, you see, that’s how girls are. We treat our mother in laws as our own mothers. We are lucky enough to have two mothers. At the same time, there are women who complain that their daughter-in-law doesn’t make perfect round chapattis. Why would anyone humiliate a girl so? Maybe she doesn’t know how to cook, but she will learn. Not many girls know how to cook before they’re married. But almost all of them learn.

I can’t thank Allah enough to bless me with such a loving husband and family. I’m truly one of the lucky ones.

“The photos are here! Fatima, come and have a look at them.” My sister-in-law said excitedly.

We’ve been brought up in a world where all this has become a necessity. Even if you say that you don’t want it, you don’t really mean it. Girls dream of their marriage day since childhood. We dream about how our dress is going to be, how the jewelry will be, where we would get married etc. I’m sure not many of us actually dream about getting married in a masjid. If that is your dream then MashAllah I respect that a lot. I wish it were mine.

In the end, every girl dreams of having a fairytale wedding. So did I. Every girl wants to feel like a princess. As did I.