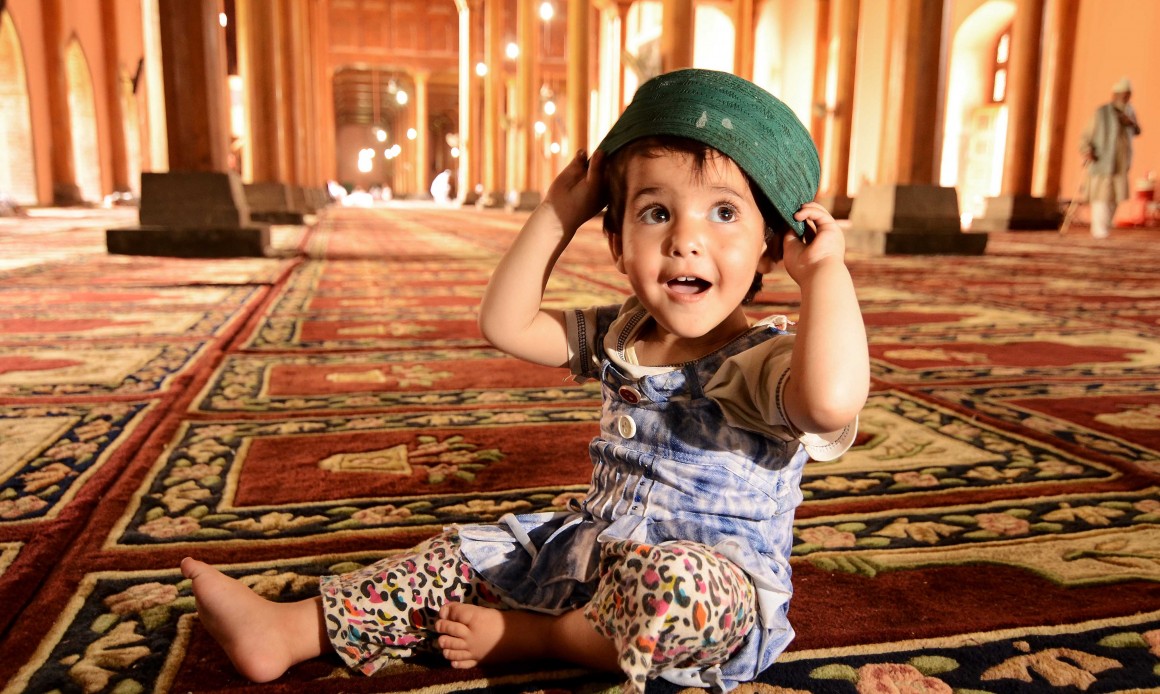 Maryam رضي الله عنها. A name that tells an entire story by itself, that is synonymous with purity and chastity. A name that reflects mind-boggling courage, faith and patience.

The story of Maryam and ‘Isa عليهما السلام is a timeless one. We’ve also derived several important lessons from it, like steadfastness, complete faith in Allah (tawakkul) and prompt obedience.

However, underneath the apparent lessons, there are a lot more gems and values to be gained from their story, and we shall delve into just that.

Maryam رضي الله عنها was the daughter of ‘Imran عليه السلام and Hannah, both of whom were pious, God-fearing people. When Maryam was born, her mother immediately invoked Allah, asking Him to protect her baby from the cursed Shaytaan, and pledged her to Allah’s deen and His services even before her birth.

(Remember) when the wife of ‘Imran said: “O my Lord! I have vowed to You what (the child that) is in my womb to be dedicated for Your services (free from all worldly work; to serve Your Place of worship), so accept this, from me. Verily, You are the All-Hearer, the All-Knowing”. But when she had given birth to the child, she said: “O my Sustainer! Behold, I have given birth to a female” – the while Allah had been fully aware of what she would give birth to, and [fully aware] that no male child [she might have hoped for] could ever have been like this female – “and I have named her Maryam. And, verily, I seek Your protection for her and her offspring against Satan, the accursed.” [Surah ‘Aal e `Imran, 35-36]

This brings a vital point to light- the Tarbiyyah (upbringing) of a child begins even before he/she comes into this world. This can be done by the mother developing a close connection to Allah and His Book during the course of her pregnancy (and after, of course), renewing her intentions for her child continuously and making constant Du’a to Allah for her child’s spiritual strength.

This, we find, is a refreshing take on motherhood, as compared to what we usually see around us nowadays: parents are often lax with regards to religious teaching and upbringing because “He/she is just a child now. Let them enjoy now. They’ll learn and follow everything later.” This line of thought is a dangerous pit to fall into, because:

The next thing we know about Maryam in her story is that Allah took care of her, provided for her and caused her to grow up in a beautiful manner, with Zakariyya عليه السلام as her guardian.

And thereupon her Sustainer accepted the girl-child with goodly acceptance, and caused her to grow up in goodly growth, and placed her in the care of Zakariyya. Whenever Zakariyya visited her in the sanctuary, he found her provided with food. He would ask: “O Maryam, whence came this unto you?” She would answer: “It is from Allah; behold, Allah grants sustenance unto whom He wills, beyond measure.” [Surah ‘Aal e`Imran, 37]

This goes on to show the ripple effect of sincere dua, strong faith in Allah, and sincere intention. Her mother’s dua and intention not only ensured a steady supply of never-ending rizq from Allah to her, but also a sense of wisdom and understanding from a very young age.

Never underestimate the power of dua, much less, a mother’s dua. When dua has the power to change the qadr (destiny) of a man, what makes us think ours will be in vain? Why do we make dua so half-heartedly when Allah has spoken of his willingness to answer our duas numerous times? Let’s all make a sincere effort to spend at least 5 minutes in heartfelt dua after every prayer, and see how it effects our soul and life, InshaAllah.

Maryam was then visited by angels who gave her the good news that Allah had chosen her and purified her and elevated her over all the women of the world. She was also given the glad tidings of a child who was chosen by Allah to serve in His way in this world, and who would be among His near one’s in the Hereafter.

And lo! The angels said: “O Maryam! Behold, Allah has elected you and made you pure, and raised you above all the women of the world. [Surah ‘Aal e `Imran, 42]

Lo! The angels said: “O Maryam! Behold, Allah sends you the glad tiding, through a word from Him, [of a son] who shall become known as `Isa Ibn Maryam, of great honour in this world and in the life to come, and [shall be] of those who are drawn near unto Allah. [Surah ‘Aal e `Imran, 45]

She was chosen by the Almighty Himself to bear one of His prophets without a father, and was chosen by Him to be elevated in rank over all the women of this world. SubhanAllah. It seems surreal when thought of objectively. Of course, with this preference came enormous responsibility- complete submission to Allah, unwavering worship and blind obedience to His commands.

O Maryam! Remain you truly devout unto your Sustainer, and prostrate yourself in worship, and bow down with those who bow down [before Him].” [Surah ‘Aal e `Imran, 43]

While this may seem overwhelming, let’s imagine a scenario: You are in class, minding your own business, being a good student. Your favorite teacher calls you up to his/her office and informs you that they’ve decided to submit your name to the school’s scholarship committee, thus giving you preference over everyone else. How would this make you feel? Immensely grateful, definitely. Would you also back away from fulfilling the responsibilities this privilege would entail- namely, studying harder and living up to the teacher’s and everyone else’s expectations of you, and staying away from wrong? Of course not! If anything, you’d claim ownership of these responsibilities with a gusto because they’re a small price to pay for what you’re getting.

So, for Maryam, رضي الله عنها Allah’s commands weren’t a burden, na’udhu billah. They were a welcome obligation upon her.

The child she was being blessed with was a blessing, an honor and a miracle. But that’s not to say that this blessing came with its fair share of pain and sacrifice. She, a pious chaste woman who no man had ever touched, had to face the hateful accusations of Bani Isra’il, hide away during her pregnancy and give birth to her baby by herself! Her pain during childbirth was so great that she exclaimed that she would prefer death over it! This pain was not unnoticed by the Almighty who provided her with water, food and shade to ease the pains of childbirth. As it rightly goes, Allah tests those whom He loves and He never burdens a soul beyond that which it can bear.

And the pains of childbirth drove her to the trunk of a palm tree. She said, “Oh, I wish I had died before this and was in oblivion, forgotten.” But he called her from below her, “Do not grieve; your Lord has provided beneath you a stream. And shake toward you the trunk of the palm tree; it will drop upon you ripe, fresh dates. So, eat and drink and be contented. And if you see from among humanity anyone, say, ‘Indeed, I have vowed to the Most Merciful abstention, so I will not speak today to [any] man.’ ” [Surah Maryam, 23-26]

When Maryam brought ‘Isa (عليه السلام) to her tribe, they accused her and slandered her, to which she uttered not a single word. The love of Allah for His beloved slave was such that He not only made baby Isa speak and clear away suspicion from his mother’s name, but He also revealed a verse to Prophet Muhammad ﷺ defending her honor in the most beautiful of ways.

[‘Isa] said, “Indeed, I am the servant of Allah. He has given me the Scripture and made me a prophet. And He has made me blessed wherever I am and has enjoined upon me prayer and zakah as long as I remain alive. And [made me] dutiful to my mother, and He has not made me a wretched tyrant. And peace is on me the day I was born and the day I will die and the day I am raised alive.” [Surah Maryam, 30-33]

`Isa son of Maryam, was but a messenger; all [other] messengers had passed away before him; and his mother was one who never deviated from the truth; and they both ate food [like other mortals]. Behold how clear We make these messages unto them: and then behold how they are turned away! [Surah Al-Ma’idah, 75]

Maryam, apart from being the only woman in the Qur’an who is mentioned by name, was also specified twice that she was the one who “the woman who protected her private parts“.

And she who was chaste, therefor We breathed into her (something) of Our spirit and made her and her son a sign for (all) peoples. [Surah Al-‘Anbya’, 91]

A final important lesson can be derived from the following interpretation of the ayah:

And We made the son of Maryam and his mother a sign, and We gave them refuge on a height, a place of flocks and water springs. [Surah Al-Mu’minun, 50]

The latter part of the ayah holds a great lesson for all of us who worry about our future. Allah is Ar-Razzaq. The Provisioner. He is the One who has sent every single living thing down on earth with its own share of rizq- be it a human or an animal. So, it is from tawakkul that we don’t worry incessantly about the future and instead work to the best of our abilities for it; hoping for the best from our Rabb, the Provider- He who provided for a single mother and her fatherless son against all odds, SubhanAlRahman Al Raheem.

Let’s contemplate over what made this woman رضي الله عنها so perfect to Allah- her outward appearance, or her deeds and the state of her heart, and strive to achieve some level of her perfection.