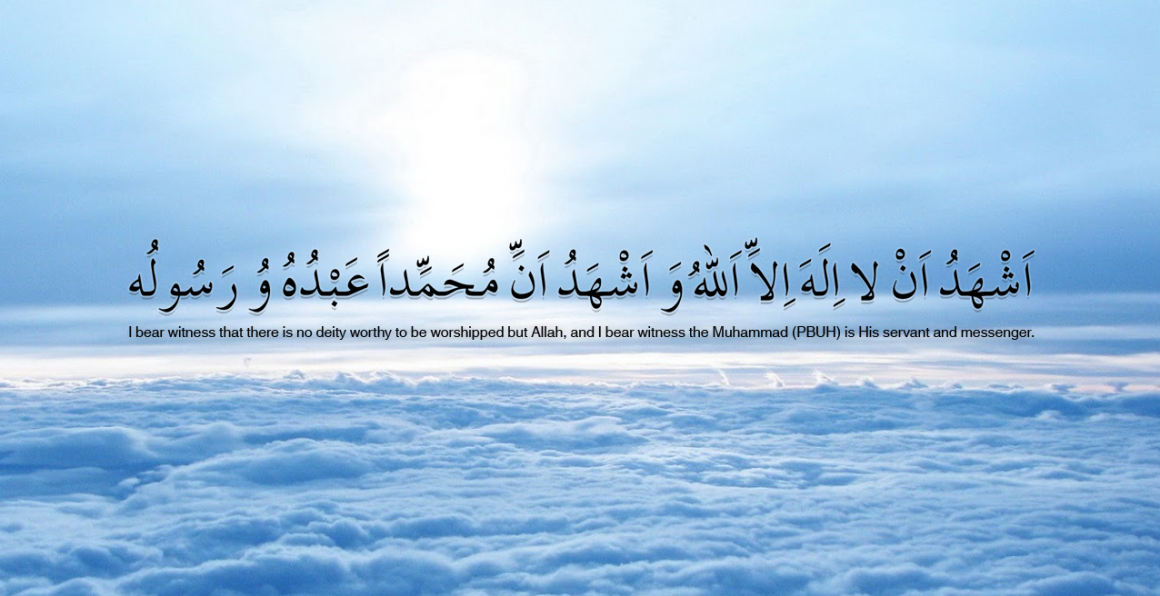 The Iman is like a compass in this long journey called life, where thunder roars, lightning strikes and waves hit you hard threatening you with the failure of reaching the shore by drowning midway in the dark nasty waters. The light of Shahadah aids you at every step assuring you of your victory. The Shahadah introduces you to your secret  armory – Sabr, Shukr, Tawakkul, Du’a, Yaqeen, Taqwa and Tawba.

If it wasn’t for these hidden gems that we possess, our journey would have been terrible; we would be lost in this ocean of dunya, unaware of the forever home, of the Aakhirah.

It’s all in this single statement that we believe in Allah, that we believe in his names and attributes attributes, in his commands, in his promise, in his help. It’s because of this single ayah that you and me can cry our eyes out to the most merciful and loving creator in the midst of the most terrifying nights, when our soul bleeds and no being hears us but we feel sakeenah, we find comfort and we feel better because we know we are in the safest hands.

Subhaanallah! What more could we ask for? The fact that Allah has opened our hearts, lifted the veils of gaflah and allowed this belief to be deeply rooted in our existence should make us go down in sujood. Not everyone has this goldmine, it’s priceless.

I remember during my early days, when I had just joined the University for studying Arabic, how overwhelming it was. How much my heart was in aww and fear of Ar – Rahman.
Once after our classes, my best friend randomly made me hear an arabic nasheed describing the love of Al – Ahad that she heard last night and told me how it made her cry. I wasn’t sure if I would feel the same as she did because I was in a very fresh state of Iman, yaa’ni I had just changed and was still in a beginning of building that connection with Allah, so I could hardly imagine any ayah making me cry let alone the nasheed but surprisingly the nasheed did. I was amazed at how when my friend paused the nasheed at every line and explained it, tears began to swiftly flow from my eyes, and my heart swelled with the love of Al – Wadood, yearning for his nearness, what an honor to be of those whom he loved, my soul exclaimed!

That’s the mercy of Al – A’zeez, who doesn’t wait till you are ready to reach that level when your Iman is at the peak, he just asks you to start the engine of your car, because the drive is all his responsibility, AllahuAkbar!

The beauty of our Deen is that it doesn’t ask you for much. Little things have enormous rewards, all it asks for is sincerity and the right intentions. Allah doesn’t want you to finish the Quran in a single day but read one ayah and ponder over it, try to apply it and LIVE by it. That’s enough and even if you can’t then at least BELIEVE in it. It doesn’t ask you to stand in salah all day long, just 5 prayers on time with the presence of your favorite organ in body – yep – The Qalb and you are rewarded for the whole day

It doesn’t ask you to sacrifice your wealth all at once but at least smile at the face of that beggar who is crossing the road and make his day genuinely, that’s going to be a beautiful sadaqaa in itself.

Everything is in the heart, the truth, the intention, the reason, the purity – and that’s all that matters. Because on Yawmul Qiyamah it’s the only piece of flesh that your master will see and judge, so you and I both have to make sure it’s sacred and pure.

We have the marvelous example of Abu Bakr رضي الله عنه here, what made him so beloved to Allah that after RasullAllah صلى الله عليه و سلم, the first one to enter Jannah will be him?

What were his deeds? How come his Ibaadah surpassed that of Umar رضي الله عنه and Ali رضي الله عنه?

Nope! Yaa Ummatun Nabbi صلى الله عليه و سلم, it wasn’t only the actions of the limbs that got him such a beautiful honor, it’s the firm yaqeen and the roots of Iman sowed deep down in his heart, that gave him that highest of honour.

This heart of yours will either get you to the horrifying dungeons of  Hell fire or towards the peaceful sanctuary of Jannah. Choose the path now before the destination is decided and the flight has taken off. The path of Tawheed isn’t an easy one, but the one which with no doubt leads to Jannah – the ONLY one.