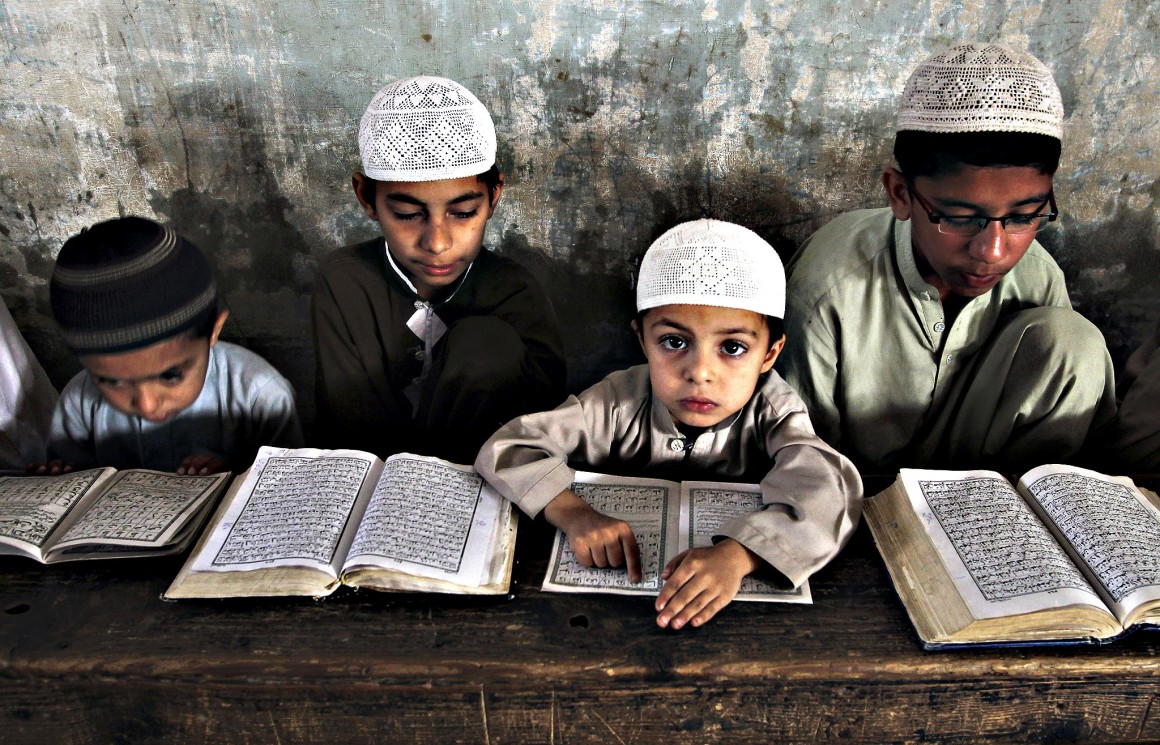 “Repeat after me boys. Alif.”

“You. Yousef, come and sit here in the front.” The teacher yelled.

Yousef gingerly got up from the back of the class and complied.

He felt a hand on my thigh. I didn’t dare look down, he stared into my book and I tried not to think about it. This was not something new, this happened every day. He continually looked straight ahead while tears fell from his grief-stricken eyes onto his rosy cheeks.

It was 5 o’clock. He was waiting at the doorstep for his father, when he heard a voice behind him, “Yousef, come with me.  I asked your father to come a little late today because I wanted to give you a private lesson. You don’t concentrate in class.” the teacher said with a smile.

Yousef looked at him, and held the teacher’s hand and walked with him into his room and closed the door. Yousef resurfaced after an hour, with swollen eyes and blood on his clothes. His father was waiting for him in the car.

“Assalamualaikum Yousef! How was your day?” his father said with a huge smile.

Yousef didn’t reply. He just kept looking out of the window.

“You must be tired now. You can go home and sleep.”

As soon as he reached home, his mother asked, “Yousef, why is there blood on your clothes? Did you fall down while playing?”

“Do you go there to study or to play? You should concentrate on your studies more and you won’t have to stay back every day.” his father said sternly.

Yousef went to take a shower and he felt so very unclean. He was in so much pain but he couldn’t tell anyone. He let the tears finally fall. He thought that it must be a punishment. It must have been his fault. It must have been something that he did. He didn’t understand what was happening to him.

It happened again. He has been touching me for a month now. It doesn’t even hurt anymore. I don’t know why he keeps punishing me again and again. I do everything that I’m told. I’m a good boy. I don’t want to go there anymore. How can I tell mom and dad what they’re doing to me over there? At first, there was only one man. Now there are three.

“Yousef, my boy, what’s wrong with you? Why aren’t you eating? I’ve made your favorite kind of pizza.”

“What’s wrong with you? You haven’t been yourself for the past few weeks.” his father said, without looking away from the newspaper.

Yousef was 5 years old at this time and this went on for 3 more years. Yousef was completely shattered when he left that place. They made him do things that no child should do.

During his adolescent years, he became incredibly wild. His grades dropped, he never respected anyone, he smoked and drank. He hated himself. He hated Allah for letting this happen to him. He hated the fact that it was an Islamic “scholar” who ruined his life. He refused to talk to anyone about it. Naturally, because he wouldn’t talk to his family, they assumed that he was just acting out.

When will this stop? I can’t take this anymore. I fear I might do something to harm myself. I fantasize about killing myself all the time. Jumping off a ledge, slitting my wrists, getting hit by a car; I’ve considered everything. I just don’t have the nerve to do it. Nobody understands me.

Growing up, Yousef never had any friends. He would spend most of time in his room, alone. His parents were fed up with this attitude. They just couldn’t understand why he behaved in this manner.

“He’s in his room. Why? What’s the matter?” his mother answered

Yousef walks towards his father and sits on the chair in front of him and says, “Here I am. What do you want now?”

“I don’t want anything. I just want to talk to you. How are your studies?”

“I just heard that your results were due last week. I still haven’t seen any of your grades.”

Yousef gets up and hands his progress report to his father. “Here, have a look!”

“What is this? Are you crazy? Is this why we send you to school? Can’t you do anything properly at all?”

One day, as Yousef was walking towards his house, cigarette in hand, he ran into his old friend,

Ali. Ali used to go to the Islamic school along with Yousef.

“Walaikum salam. I’m sorry but I don’t.” Yousef lied. He did remember Ali but he just didn’t want to talk to him.

“Remember we used to go to the same school?”

As Yousef walked away, Ali wondered why Yousef refused to recognise him. They used to be really good friends.

I saw Ali today. I don’t want to face him. Every time I see someone from that time of my life, it just hurts me even more. They were all there at the time. Nobody did anything. Nobody cared.

Nobody stopped that vile animal from taking me in his room.

I had a fight with dad again today. I feel horrible but I don’t know what to do. How do I make him understand how I feel? I just want to die. I can’t take this anymore.

Today, I cut myself. I just wanted some relief from the mental stress. With the physical pain, I was able to divert my mind for a bit. I don’t know how much longer I can hold on for. I wish I could tell someone what I really feel but I can’t bring myself to do that.

Yousef heard his phone ring, it was an unknown number. “Hello?”

“So you do remember me.”

“Ali, what’s your problem? Why are you pestering me? I don’t know what you want from me?”

“Yousef, we were very good friends at one point. I just…need your help.”

“I have nothing to offer to you. I can’t help you. I’m sorry.” Yousef said irritably.

“I…don’t know how to tell you this but something happened to me when we were at that school.”

“Can we meet up somewhere? I can’t discuss this on the phone.”

“Okay. We can meet up tomorrow” Yousef replied.