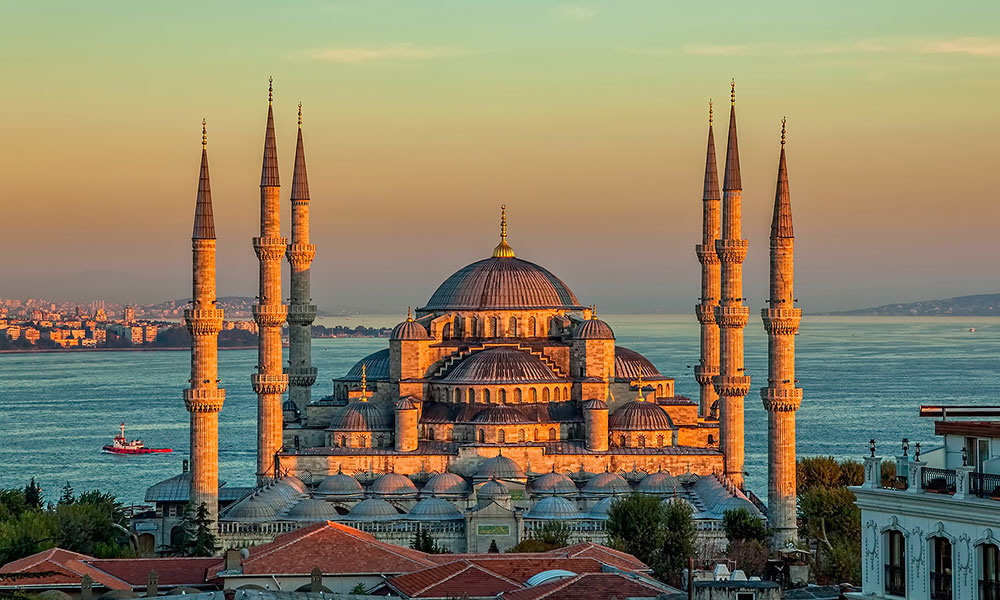 Istanbul, where continents clash, is a place where you can find anything. This meeting place of East and West is a union of beauty, poetry, mysticism, history, and several cultures. Napoleon Bonaparte once said: “If the world were a single state, Istanbul would be its capital”. Love for this city is destined to last forever. Amidst the streets, bazaars, and metro stations, greetings echo from Merhaba to Bonjour, Hola, Guten Tag, Ciao, Namaste, Salaam, Ahlan Bikum, Shalom, Selamat Patang, and Hello.

In the Kadıköy neighborhood, history resonates through its ancient Jew quarters, Armenian and Orthodox churches. One reminisces the Byzantine Empire and the Romans through cathedrals and the Muslim Ottomans through mosques, hammams, and Islamic schools. The link in the city’s architectural language articulates the peaceful solidarity in the past, as our Prophet’s (صلى الله عليه وسلم) words,

“Whoever killed a person having a treaty of protection with Muslims, shall not smell the scent of Paradise, though its scent is perceived from a distance of forty years.”
[Sahih Al Bukhari]

has framed the essence of all-embracing behaviors for centuries.

From the majestic domes built by Sinan, one of the most celebrated architects, to bird nests across the walls of Saray palaces and the colorful calligraphic compositions engraved on mosque walls; Istanbul- the city of stones, the city of triumphs, home of martyrs like Sahabi Abu Ayyub al-Ansari, and the victory over oppression from Mehmet Fatih- resonates firmness and strength as much as it is has come to be a hearth of mercy for mankind. Every night stories of the wise are read, from anecdotes of Nastradin, to Rumi’s proverbs. The city’s melody is in its nostalgic poetry, birdwatching, fishing nets under the Galata Bridge, the sounds of ships passing through the Bosporus. Istanbul does not sleep, it speaks.

Seagulls fly over the ocean

In a cloudless sky tune.

Their breath sails over the bluish serenity

Merging with my heart’s cheerfulness.

Sun light warms up the soul

Half of the heart beats in the city’s liveliness.

The other half in memories left hostage.

Istanbul sometimes resembles a young, playful girl, with a noble woman with white hair whose face never wrinkles. Its nature changes like that of a girl’s moods. In the morning the sun rises, at lunch it may rain and at night the stars illuminate the sky.  Its parks are tulip-like rivers, which evoke the desire to swim in them, adorned with pink, red and white roses. The narrow and steep cobbled streets are decorated with small colorful flower pots on every wooden window and white painted houses.

Voices of children buzz over the neighborhood streets. Old grannies who cannot go down the stairs to the markets, throw their baskets to the men selling fruits and vegetables beneath their windows. They place the money inside the basket and the men replace it with food for them. “Ablacim-abicim” (My sister- my brother) are words exclaimed in every market and stores.

-“Where are you from?” a taxi driver asked me one day.

-“Albania”, I replied, annoyed at his question. “We are neighbors“, I added.

-“Neighbors?! No.” he replied, with the “nooo” really prolonged. “Kardesh! Kardesh!” (We are brothers!) He pointed out twice as he took the turn to drop me at my destination.

He was right, all Muslims are brothers…

“The believers are but brothers, so make settlement between your brothers. And fear Allah that you may receive mercy.” (Surah Al-Hujurat: 10)

During the holy month of Ramadan, the city takes to another atmosphere. Its spirit knocks on all families, streets, mosques and parks. It’s as if everything freezes- fatigue, boredom and all your worries have escaped. You become so happy by giving. At the Sultan Ahmet mosque, Taksim Square, Süleymaniye Mosque Park and everywhere else, you can find rows of tables covered in white. Iftar invites every fasting person to join and break fast together.

The food in Ramadan fragrances

Round bread with black seeds,

Sincere prayers in the light of the candle.

on the door of the most Merciful.

In this month you experience Ramadan like the Sultan of all other months. Across the minarets of each major mosques are hung string lights with the script “Hos Geldiniz Ramazan” (Welcome Ramadan) which illuminate the nights of Ramadan. This tradition called “Mahya” reminds each fasting person: calm your troubled souls.

During the summer, fasting falls like a breeze under the positive atmosphere of the terraces illuminated by the magical full moon on the 15th night. The days of fasting arrive and pass one by one as the night leaves the day. In the end, Lord remains, Who, on these days has opened the gates of forgiveness for all His servants.

Every night in Istanbul,

The lamps light up the city

Adhan calls from all corners,