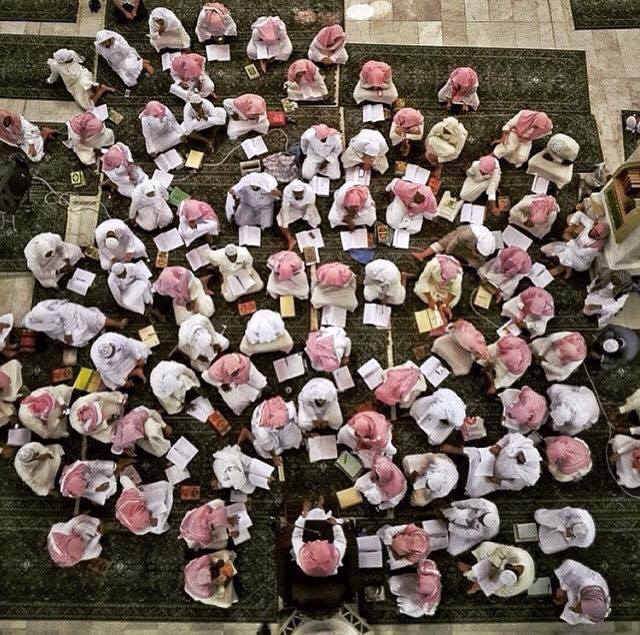 Have We Abandoned Ilm?

Abu Huraira reported: The Messenger of Allah صلى اللّٰه عليه وسلم said, “Whoever travels a path in search on knowledge, Allah will make easy for him a path to Paradise.” [Sahih Muslim, 2699]

Imagine yourself, walking through the doors of a hall that is filled with tables and chairs from one end to the next, the seats mostly filled with eager faces of students ranging in age from young to old, men and women, teenagers even. You find a seat that is just the right distance from the front, yet not too far back as to become lost in the room or hidden away from the line of sight of your teacher. You are enthusiastic and maybe a little nervous not knowing what to expect from the classes you are about to embark upon. You find a sense of comfort knowing you are among a large group of people who probably are all in the same boat as you are, as you look around to see who you may know or whom you can acquaint yourself with. Just then, your teacher enters the room and greets everyone with “Assalaamu Alaikum..”, you feel excited to finally be doing this and thus begins your journey in the seeking of Islamic knowledge beyond what you already know.

Fast-forward a few weeks, or even months and you are already a little tired, because yes there is also a life outside of seeking knowledge; there are responsibilities as a mother or father, son or daughter, sister or brother, employee or employer and a host of other possible roles we fill on a daily basis that also require our time and energy. You still however, push yourself to attend your classes because you know it is important and you take your religion as seriously as you are able to. As time continues to pass and you realise that you have missed a few weeks of classes back to back, you wonder if it makes any sense to continue because you have already missed so much. You feel a sense of guilt, or even depressed because maybe you let yourself down by not committing to something you promised yourself that you would. You are not alone however, for in this same class, the number of students have drastically dwindled in the months gone by, by others who quite possibly endured the same responsibilities you have, and yet others who left it off because it became too difficult and saw it fit to not put themselves through it any longer. The reasons for no longer pursuing or even attending Islamic knowledge classes in the first place are endless, hence the reason that after some time numbers decrease and our classrooms are left with just a few students who push through.

It is no secret that we all have worldly distractions that pull us away from the remembrance of Allah, that cause us to become so caught up we feel tired or frustrated, and procrastination then sets in when it comes to following up with the extra Ibaadah that will help us on our voyage to bettering ourselves daily. As Muslims we are told to ask Allah for knowledge which will bring about benefit. Allah says,

Seeking knowledge is by no means an easy feat, but what counts the most is the effort that is put in, no matter how little or insignificant it may seem. Life is demanding and it is easy to delay until a later date the aspects in life that are deemed not as important as the rest. We live in a society where it is all about survival of the fittest, particularly when it comes to earning wealth and seeing after the needs of the family or oneself. Society demands that for us to get anywhere in life, to be comfortable, happy and secure, amassing as much wealth as we can, is the quickest way to do so. This however is not easy, and so our time and energy are spent in affording ourselves a comfortable lifestyle, sometimes causing us to forget what we were put here to do as Muslims. Allah says in the Quran,

The above verse tells us that as Muslims we are the best of people because we are the ones who enjoin what is good and forbid what is evil, thereby making it our duty as the Ummah of Muhammad صلى اللّٰه عليه وسلم to be the ones continue to carry this trait onward. It is then important that we seek knowledge, not only secular, but also Islamic knowledge, as both are of major importance and benefit to mankind and in particular the Muslims, who are in a down-trodden state at the moment. Do not then delay this important aspect of being a Muslim, even if it is reading authentic books, taking classes at a masjid nearby, sitting with the scholars or even enrolling in classes online which are currently made easily accessible worldwide.

Let us become an Ummah where our youth will be encouraged and enthusiastic to want to learn about their beautiful Deen by the elders who are both understanding and patient. Let us become an Ummah where the masjid halls are once again filled with activities that are inviting, exciting and above all beneficial to everyone, young and old, man woman and child. Let us become an Ummah that sees more than just the state of our brothers and sisters in Islam and feel helpless, but rather feel the need to make a change for the betterment of all, be it through dawah, having good relations in our communities, or even just making dua to Allah. The first step in becoming a better Muslim and making the change within ourselves and by extension the Ummah, is in attaining beneficial knowledge of this beautiful religion of ours, Islam.